Directions (Q. Nos. 1- 4) Study the following pie chart in respect of a library to answer these questions.

Question 1: By how much percentage is the value of history books higher than that of film magazines?(a) 172%(b) 27.2%(c) 272%(d) 72%
Question 2: Which of the following statement is true?(a) Literature, mathematics and science books comprise nearly 50% of the book section in numbers(b) Sports, business and film books account for more than half of the magazines(c) The value of sports magazines is higher than that of geography books(d) None of the above
Read more »
Posted by Futurebankers at 08:41

Directions (1-15): In each of the following sentences, parts of the sentence are left blank. Beneath each sentence, five different ways of completing the sentence are indicated. Choose the best alternative from among the five options.

Q2. I think it is the duty of science – I do not say of every individual man of science – to study the means by which we can __________ ourselves to the new world. There are certain things that the world quite obviously needs: __________, as opposed to dogmatism in our beliefs; an expectation of co-operation, rather than __________, in social relations; a lessening of envy and collective __________. These are things which __________ could produce without much difficulty.
(a) adapt, fanaticism, competition, malice, philosophy
(b) adopt, fanaticism, affection, malice, science
(c) reorient, tentativeness, war, consciousness, science
(d) adapt, tentativeness, competition, hatred, education
(e) orient, diffidence, competition, malice, education
Read more »
Posted by Futurebankers at 08:22

Direction (Quest 1 - 5) : Read the following information and answer the questions given below.

G, H, I, J, K, and L are sitting in a single row having eight seats. Three of them are facing towards north and three are facing towards south. Two seats are vacant but neither of the extreme ends is vacant.
1. Who among the following sit at the corner?
a. L
b. G
c. H
d. I
e. K

5. How many person(s) are sitting between G and I?
a. None
b. One
c. Two
d. Three
e. None of these
Directions (Quest 6 - 10) : Read the following information and answer the questions given below.

7. Who lives on the floor immediately above Ravi?
a. Rahul
b. Ravit
c. Ram
d. Rasul
e. None of These

8. To which of the following cities is Rahul travelling?
a. India
b. Iraq
c. Iran
d. Iceland
e. Italy

9. How many people live between the floors on which Rahul and the one traveling to Iraq live?
a. None
b. Two
c. One
d. More than three
e. Three

10. Who lives on the floor immediately below Rubina?
a. Rahul
b. Ravit
c. Ravi
d. Rasul
e. None of These 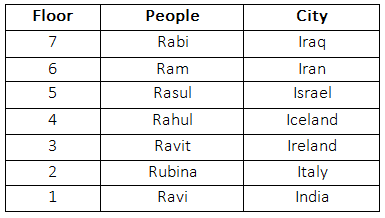