PUZZLES SET 35:BASED ON NEW PATTERN 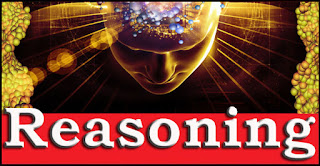 Directions(1-5): Read the following information carefully and answer the questions given below:
(i) Seven teachers Prashant, Vidushi, Vandana, Aniket, Neeraj, Meena and Priyanka teach in the science section of XII of a particular school. They teach one of the following subjects Zoology, Botany, Chemistry, Physics and Maths
(ii) Physics and Chemistry are teached by two teachers.
(iii) Both the Chemistry teachers and one from Zoology and Maths each has cleared UGC (NET).
(iv) Four female teachers are Vidushi, Vandana, Meena and Priyanka. Of them two are married. Two teachers are members of PTA executive council, out of which only one is male. However, none of the married teachers are its members.
(v) All the married teachers except one are class teachers of one class or the other. There are four married teachers Prashant, Vidushi, Aniket and Meena. There are three subject teachers.
(vi) None of the married women teachers have cleared UGC(NET). Two male teachers have cleared NET out of which one is married. he is Mr.Prashant, a subject teacher. He is not from PCM stream. He teaches Botany or Zoology.
(vii) The PTA members are subject teachers and not class teachers.
(viii) PTA members teach same subject.
(ix) Only Mrs.Vidushi teaches Botany. Priyanka is a class teacher.
1. Who among the following are the PTA members? 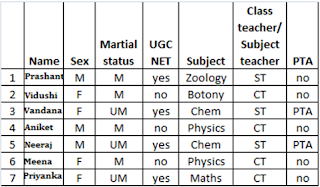 2. How many pairs of letters are there in the word CAPITULATE each of which has many letters between them in the word as in the English alphabetical series?

What does Priyanka teach?
Maths
Chemistry
Can’t be determined
None of these

3. Who is the male class teacher?

Meena
Aniket
Prashant
Either Aniket or Neeraj
None of these

4. Which of the following combinations is correct?

5. Which of the following combinations is incorrect? 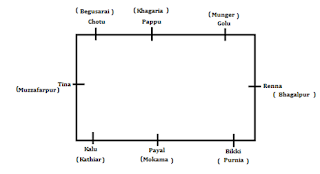 7. Who is definitely sitting diagonally opposite to Bikki?

8. According to the sitting arrangement what will come in place of question mark? Bikki : Bhagalpur ::Chotu : ?

Muzzafarpur
Mokama
Munger
Katihar
None of these

9. From which city does Pappu belong?

10. Which of the following combinations is definitely correct?


Directions (Q. 11-15): Study the following information carefully to answer the given questions. A word and number arrangement machine when given an input line of words and numbers rearranges them following a particular rule in each step. The following is an illustration of an input and its rearrangement:
Input: all 25 next call English 35 long over 42 jug under 39
Step I: call next English 35 long over 42 jug under 39 all 25
Step II: call jug next long over 42 under 39 all 25 English 35
Step III: call jug long next under 39 all 25 English 35 over 42
Step IV: call jug long next all 25 English 35 over 42 under 39
And step IV is the last step of the above input. As per the rules followed in the above step, find out the approximate step for the given input.
Input: power turn copper every 22 order 34 flower kite inter 29 aptitude 41 hope
11. What is the position of ‘order’ in Step II?

II
III
V
There is no such step
None of these

13. How many steps will be required to complete the arrangement of the above input?

Five
Six
Four
Seven
None of these

14. Which of the following words/numbers would be at the eighth position from the right end in the last step?

32
order
41
aptitude
None of these

One
Three
Five
None
None of these