Directions (Q. 1-5): Study the following information carefully and answer the given questions.
There are seven boys Jadeja, Saha, Pujara, Kohli, Vijay, Rahul and Rahane who participated in a game competition which started on Monday and ended on Sunday. In the first round of the competition, each of them played different games, Cricket, Tennis, Football, Hockey, Badminton, Volleyball and Basketball, but not necessarily in the same order. They like different Social Networks, Facebook, Twitter, Hike, Whatsapp, Telegram, Instagram and Google, but not necessarily in the same order. Saha did not play on the day either immediately before or immediately after the game of Kohli, who does not like either Telegram or Facebook or Whatsapp Social Network. Two games were held between the game of Rahane and Rahul, neither of them played on Monday. There was one game between the games of Kohli and Pujara. But Pujara’s game did not happen either on Monday or on Wednesday. Pujara likes Twitter Social Network and played Cricket. The one, who played Football on the last day of competition, likes Hike Social Network. Vijay played immediately after Pujara and he likes Facebook Social Network. Jadeja does not like Telegram Social Network and played Hockey. Kohli did not play either Basketball or Volleyball. The one who played Badminton was scheduled immediately after the game of Cricket. Rahane, who likes Instagram, played on the fourth day of the competition but played neither Cricket nor Tennis.

Directions (Q. 6-10): Study the following information carefully and answer the given questions.
There are nine people A, B, C, D, E, F, G, H and I in a family. It is a three generation family. They are sitting in a row facing in North and South directions not necessarily in the same order. The following information is known about them. C who is A’s father sits fourth to the right of B who is the only daughter of E and they both face in the opposite directions. D sits third to the right of F who is B’s grandmother and one of them sits adjacent to I. D is unmarried and faces in a direction similar to that of G. E who is the sister of D sits at one of the ends with a female. C’s neighbours are females and face in opposite directions. F’s spouse C faces in the North direction. I who is the wife of G sits at the middle facing in South direction. A, who is male, is the only sibling of G sits exactly between D and B’s cousin who is a male. The people sitting at ends face in North direction. A faces in same direction as that of F. C sits adjacent to I.
6). Who among the following sits at one of the ends?
a)   F’s son
b)   H’s mother
c)   A’s daughter
d)   G’s son
e)   None of these
7). How is D related to A?
a)   Wife
b)   Sister in law
c)   Brother in law
d)   Husband
e)   None of these
8). How many males are there in the family?
a)   2
b)   3
c)   1
d)   5
e)   4
9). C and D face in which direction in the respective order?
a)   North, South
b)   South, North
c)   North, North
d)   South, North
e)   None of these
10). Who sits third to the right of H’s mother?
a)   B
b)   A
c)   F
d)   G 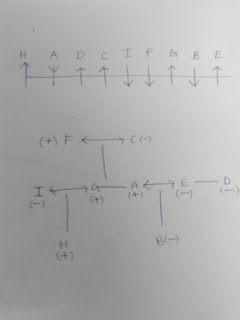