I. Study the following information carefully to answer the given questions.
There are 7 people namely viz P, Q, R, S, T, U and V who play a game, each one throws a dice with numbers 1-6, then picks a card and then performs a particular activity. A number on the dice is repeated only once. And each activity is performed by not more than 2 people. There are 4 activities namely singing, dancing, acting and mimicry. All four cards color i.e. Hearts, Spade, Club and Diamond are picked by the people and not more than 2 people picked the same color card.

2.Which of the following activities is performed by the one who gets a 2 on the dice?
1.singing2.dancing3.acting4.mimicry5.Either (1) or (2)

3.Who among the following does mimicry?
1.R2.the one who gets 33.U4.S5.cannot be determined

4.Which of the following statements is true?
1. P gets 3 and does dancing2. S gets 2 and a club card3. V doesn’t get a spade4. V and S get the same number5. None of these

II. Study the following information carefully to answer the given questions.
There are six persons namely A, B, C, D, E and F living in a triple storey building with six flats. The floors are Ground, Middle and Top, each having two flats. Those who have four or more trophies occupy the top floor and go by different cabs. The one who is in IT department in a company goes by “Easy” cab while the one who is in Electrical department of a company goes by “Taxi for Sure” cab. A who is in Manufacturing department has three trophies. D, an unmarried woman, does not have any trophy, occupies the middle floor. C, a middle floor occupant, goes by Uber cab. One of the two persons having two trophies goes by Ola cab and is in HR department in a company. Two persons, of whom one is in marketing department, do not go by cabs. The ground floor occupants have bike.  E and F have car while the rest have bike.
6.By which cab does “D” go?
1.Taxi for Sure2.Easy3.Taxi for Sure or Easy4.No cab5.None of the above

7.In which department does “C” work in?
1.Marketing2.Finance3.IT4.Research5.Cannot be Determined

9.How many trophies does B have?
1.None2.One3.Two4.Three5.None of these 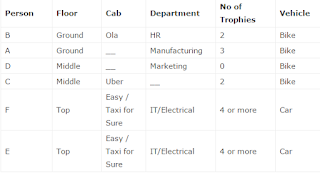