3.Which of the following is true regarding C?
A. C faces south direction.B. None of the given options is trueC. C is from BangladeshD. The person from India faces CE. The person from Hungary is an immediate neighbor of C

5.Who amongst the following sit at extreme end of the row?
A. The person from Denmark and RB. The persons from Bangladesh and AC. D and the person from JapanD. The persons from Canada and PakistanE. A, E
II. Study the following information carefully to answer the given questions.
Ten persons – P, Q, R, S, T, U, V, W, X and Y are sitting in two rows with five persons in each row. In Row – 1, the persons are facing south and in Row – 2, the persons are facing north. Each person in row one faces a person from the other row. All of them have a laptop of different companies, viz  HP, Lenovo, Acer, Dell,  Sony, Samsung, TOSHIBA, Apple, Asus and HCL but not necessarily in the same order.
R owns TOSHIBA. The one who likes Dell sits opposite to the one who is second to the right of Q. X does not like HCL. T sits opposite to the one who sits second to the left of the person who owns Acer. There is only one person stands between Q and R. The persons who like Sony and Samsung sit opposite each other. U sits opposite to P, who owns HP. The one who owns Lenovo sits opposite the one who owns Apple. Y is not facing the north but sits third to the left of V, who owns Lenovo. T sits at one of the ends of the row and owns Samsung. The one who owns Apple is on the immediate right of S, who does not own HCL. The persons who own Acer and Dell are not facing the north direction.
6.S owns which of the following brand of laptop?
A. AsusB. AppleC. SonyD. TOSHIBAE. None of the above

7.How many persons sit between S and R?
A. OneB. TwoC. ThreeD. Can’t be determinedE. None of the above 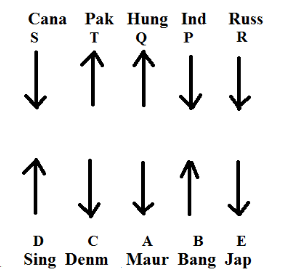 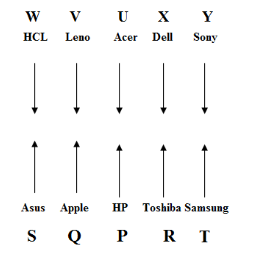