Directions(1-5):Study the following information carefully and answer the given questions.
Ten Sports personalities are sitting in two parallel rows of six seats each. One seat is vacant in each row. Geeta Phogat,Sushil Kumar, Ravichandran Ashwin, Vijender Singh and Sania Mirza are sitting in row-1 facing South. Sachin, M.S.Dhoni, P.V.Sindhu, Deepa Karmakar and Sakshi Malik are facing North. Each likes a different brand of laptops i.e. Lenovo, HP, Dell, Acer, Samsung, Apple, Sony, Asus, Toshiba and HCL.
DeepaKarmakar sits third to the right of P.V.Sindhu and likes Acer. Only two people sit between M.S.Dhoni and the vacant seat. M.S.Dhoni does not like Samsung or Dell laptop. Sania Mirza is not an immediate neighbour of Ravichandran Ashwin. Sushil Kumar likes HCL. The one who likes Dell laptop faces the one who likes Asus. The one who likes Dell sits opposite to the one who sits third right of the person who sits opposite to Deepa Karmakar. Ravichandran Ashwin is not an immediate neighbour of Vijender Singh. Sakshi Malik, who likes neither Samsung nor Apple, does not face the vacant seat. Neither Deepa Karmakar nor P.V.Sindhu sits at any of the extreme ends of the row. Vijender Singh faces P.V.Sindhu. Vacant seats are not opposite to each other. Two seats are there between Ravichandran Ashwin and Sushil Kumar, who sits third right of the one who likes Sony. The one who likes Toshiba laptop faces the one who likes Acer. The persons who like the Lenovo and Asus are adjacent to each other. Vacant seat of row – 1 is not an immediate neighbour of VijenderSingh .M.S.Dhoni sits at one of the extreme ends of the row. P.V.Sindhu does not like Lenovo and Asus. Vacant seat of row-1 does not face Deepa Karmakar who doesn’t sit at any of the extreme ends of the row.

1.Who among the following likes Apple?
1.Sakshi
2.Deepa Karmakar
3.M.S.Dhoni
4.Vijender Singh
5.None of these

2.Four among the following form a group in a certain way. Which of the following does not belong to Group ?
1.Saniya Mirza, HCL
2.Dell, Sachin
3.Samsung, M.S.Dhoni
4.Sushilkumar, Toshiba
5.Sakshi, Acer

3.How many people will sit between Sachin and M.S.Dhoni?
1.One
2.Two
3.Three
4.Four
5.More than four

Directions (6-10): Study the following information carefully and answer the given questions.
Eight friends Damodar, Dinesh, Daniel, Deepak, Devi, Deepti, Dilip and Divya are sitting around a square table in such a way that four of them sit at four corners while four sit in the middle of each of the four sides, but not necessarily in the same order. Each one of them like different colours viz. Green, Yellow, Black, Purple, Pink, White, Orange and Red. The one who sit in the middle of the sides face the centre while those who sit at the four corners face outside(i.e opposite to the centre).
Dilip sits third to the right of Devi. The one who faces the centre likes Green Colour. Devi sits on one of the corners of the table. Dinesh does not like yellow. The one who likes black colour is one of the immediate neighbours of Deepti.
The one who likes green colour sits immediate left of the person one who likes black colour. Only one person sits between Deepak and Dilip. Dinesh is one of the immediate neighbours of Deepak. The one who faces the outside of the centre likes Pink Colour.
The one who likes Purple faces the Dilip. The persons who like Orange and White sit next to each other. Devi does not like Pink. Daniel sits second to the right of Dinesh. Only three persons sit between Dinesh and Damodar.
Divya sits to the immediate right of Damodar. The persons who like Yellow and Pink sit on the corners and opposite to each other. The person who like Orange sit immediate right of the person who likes Red.
6.Who among the following likes Black?
1.Dinesh
2.Daniel
3.Deepak
4.Devi
5.Damodar

7.Four of the following five are alike in a certain way based on the given arrangement and so form a group. Which is the one that does not belong to that group?
1.Daniel,Damodar
2.Damodar, Devi
3.Daniel, Dinesh
4.Dinesh, Deepak
5.None of the above

10.Which of the following statements is true regarding Dilip?
1.Dilip face outside
2.Dilip likes Purple
3.Dilip sits immediate left of the person who likes Orange
4.There are two people sit betwenDilip and Deepti.
5.None of the Above 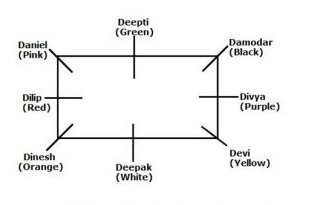