2.Who amongst the following lives exactly between the two vacant floors?
A. B
B. G
C. F
D. A
E. C

5.How many people live between C and E?
A. Four
B. Three
C. None
D. Five
E. Two
II. Study the following information carefully to answer the given questions
Seven friends T, U, V, W, X, and Z are students of a school studying in different subjects VI, VII and VIII. Not less than two and not more than three students study in each standard each of them likes to play a different sport in his spare time viz, Carrom, Badminton, Chess, Scrabble, Cards, Table Tennis and Basket Ball, but not necessarily in the same order.
6.Which Sport does U like?
A. Table Tennis
B. Badminton
C. Basket Ball
D. Carrom
E. Cannot be determined

10.Which Sport does Y like?
A. Scrabble
B. Cards
C. Badminton
D. Chess
E. Can not be determined 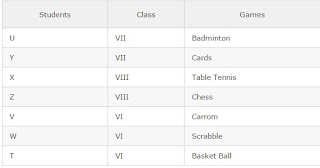