Q1. What is the position of A with respect to his grandchild?

Q3. Four of the following five are alike in a certain way based on the given information and so form a group. Which is the one that does not belong to that group?
(a) F
(b) C
(c) E
(d) H
(e) G

Q4. Which of the following is true with respect to the given seating arrangement?
(a) C is cousin of E
(b) H and H’s husband are immediate neighbours of each other
(c) No female is an immediate neighbour of C
(d) H sits third to the left of her daughter
(e) B is mother of H

Directions (6-10): Study the information and answer the given questions:

Q9. To which of the following cities is S travelling?
(a) Mumbai
(b) Bengaluru
(c) Patna
(d) Kolkata
(e) Chennai

Q10. How many people live between the floors on which S and the one travelling to Mumbai live?
(a) None
(b) Two
(c) One
(d) More than three
(e) Three

Directions (11-15): Study the following information carefully and answer the questions given below:
J,K,L,M,N,P, Q and R are eight members of a group in a company. There are equal number of engineers and managers. All of them have a different car, viz  Indica, Innova, Alto, Safari, I20, Santro, Audi and Nano but not necessarily in the same order. There are five male members in the group. P is an engineer and he comes in Innova. Q comes in Alto. The one who has I20 is not an engineer. No female has either Santro or Safari. The one who has Safari is not an engineer. N and J do not own either Santro or Audi. J is a female and both L and J are not managers. R is a manager and she has an Audi. K is not a manager and he comes in a Nano. M is a female. 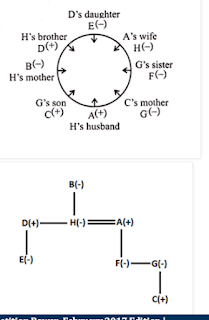 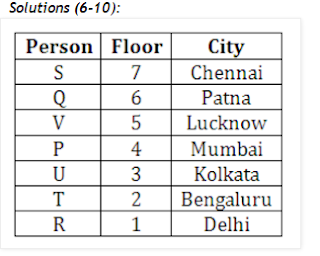 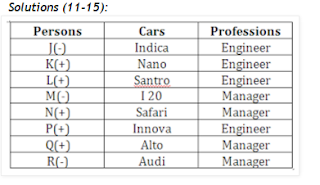