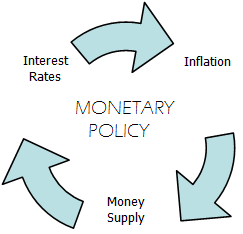 Repo Rate : Repo rateis the rate at which the RBI lends money to commercial banks in the event of any shortfall of funds. Repo rate is used by RBI to control inflation. In the event of inflation, RBI increases repo rate as this acts as a disincentive for commercial banks to borrow from RBI. This ultimately reduces the money supply in the economy and thus helps in arresting inflation.

Reverse Repo Rate : Reverse repo rateis the rate at which the RBI borrows money from commercial banks within the country. It is a monetary policy instrument which can be used to control the money supply in the country.  An increase in reverse repo rate means that commercial banks will get more incentives to park their funds with the RBI, thereby decreasing the supply of money in the market.

Bank Rate : Bank rate, also referred to as the discount rate, is the rate of interest which RBI charges on the loans and advances to a commercial bank. Bank rates influence lending rates of commercial banks. Higher bank rate will translate to higher lending rates by the banks. In order to curb liquidity, the RBI can resort to raising the bank rate and vice versa.

Marginal Standing Facility : Marginal standing facility is a window for banks to borrow from the Reserve Bank of India in an emergency situation when inter-bank liquidity dries up completely. Banks borrow from the central bank by pledging government securities at a rate higher than the repo rate under liquidity adjustment facility or LAF in short. The MSF rate is pegged 100 basis points or a percentage point above the repo rate. Under MSF, banks can borrow funds up to one percentage of their net demand and time liabilities (NDTL).

Credit Reserve Ratio : Cash Reserve Ratio (CRR) is a specified minimum fraction of the total deposits of customers, which commercial banks have to hold as reserves either in cash or as deposits with the central bank. CRR ensures that banks do not run out of cash to meet the payment demands of their depositors. CRR is a crucial monetary policy tool and is used for controlling money supply in an economy.

Statutory Liquidity Ratio : Apart from Cash Reserve Ratio (CRR), banks have to maintain a stipulated proportion of their net demand and time liabilities in the form of liquid assets like cash, gold and unencumbered securities. Treasury bills, dated securities issued under market borrowing programme and market stabilisation schemes (MSS) etc. also form part of the SLR. Banks have to report to the RBI every alternate Friday their SLR maintenance, and pay penalties for failing to maintain SLR as mandated.
Posted by Futurebankers at 21:42